Ben and I met on a warm night in May of 2018. I could have never imagined that the cute, shy guy I sat beside on the patio would be my future husband! But this blog isn’t about that first night, it’s about our engagement and how he popped the question. So here goes!

Leading up to the engagement…

I should begin by making it very clear that from the very first conversation we ever had about getting engaged, Ben’s main goal was to make sure that I was completely surprised. I should also mention that I don’t particularly like surprises. Lol. It got especially hard for me after he surprised me by taking me to Diamonds Direct one afternoon “just to browse”. He walked right up to an attendant and asked for Ashley. We were then lead to the counter where he told Ashley to let me try on the rings he had picked out…(?!) I was shocked! When did he have the time to come out here and do all of this?! That’s when I realized he is sneakier than I thought. He had me try them all on to see which ones I liked, and I was amazed by how beautiful they were. I had told him I wanted a unique band, and I think I showed him maybe one or two photos several months prior. The rings he chose were all so stunning I honestly liked them all! After that afternoon, I got really impatient lol. I was so excited I could hardly wait!

Several weeks went by, and he could tell I was getting impatient. I am kind of the worst – I would try to guess when he was going to propose, and I started asking for hints, etc. Like I said, I’m the worst. But to be fair, I was just so ready to be engaged to him and I didn’t feel like I needed a big surprise or to make a big event of it. We had talked enough about our future that I was SO ready for it!! Eventually, Ben got tired of me harassing him (lol) and he told me he was planning the engagement for the middle of January. My birthday is on January 13th and it was on a Monday. We both took off work that day so I knew we would have the long weekend together. It had to be then; I was over the moon excited.

My birthday weekend came and went, with no proposal! It was an amazing, relaxing and fun weekend. We went indoor rock climbing, ate at an amazing oyster bar, had brunch at the cutest cafe downtown, watched ducks at the park, strolled through the art museum, and had cake with my family. My heart was so full – but I was disappointed that he didn’t propose. I texted my friend Riley “I am the biggest brat ever – I swear I thought he was going to propose this weekend.” Ben had asked me what friends I wanted to be at the proposal, so I figured he had already told her the whole plan (he had). She told me to be patient – and to not think about it for a few weeks. I took her advice, and prepared myself for a February or March engagement.

The Day of the Proposal

Two weeks later, Riley told me she was planning to come to Birmingham for the weekend to see our friend Heather’s new house and tell her the big news that she was pregnant. We made plans for brunch on Saturday, and Riley said Heather wanted to go to the Botanical Gardens because she hadn’t been yet. I didn’t think much of it, I figured she was just trying to come up with things we could do together while Riley was in town. I met them inside at Ruby Sunshine and Riley broke the news. Heather and I had celebratory mimosas in baby Bennett’s honor (sorry Ri lol) and we had some of the best brunch food in Birmingham. It was a fun little girls morning out!

After brunch, we walked outside together and I thought to myself ugh it’s so cold I don’t really want to go to the gardens. Before I could bail, Riley said “ok, we’ll meet you there!” and they practically ran away to her car. lol.

At the gardens, we took our time walking around the gift shop, taking a bathroom break, etc. The sun came out as we walked back outside toward the gardens. We walked by a field full of dead rose bushes lol. “Hey let’s go to that green house over there” I suggested, as I started walking that way. Riley said, “Wait, look at that statue of Vulcan! Heather – go stand by him”. LOL. I was like uhhh ok…. I watched as Riley took photos of Heather doing the Vulcan pose. The next thing I know, someone comes up behind me and grabs my arm.

“Hey can I steal you for a second?” I turned around and it was Ben!!!!!? I was TOTALLY shocked. Like.. completely. “What are you doing here?!” I asked, laughing, confused. He held my hand and started leading me down the sidewalk. I started freaking out, thinking omg this is it….

He said “Do you remember when we came here together?” I said “yeah”, grinning stupid happy like an idiot. We had come to the gardens one sunny weekend back in October 2018, about a month after he asked me to be his girlfriend. We had walked this exact route. I remembered the trees lining both sides of the walkway and the water fountain at the end overlooking the courtyard. He said “I knew I wanted to marry you that day, when we were walking here”. He kept talking as we walked, (I blacked out a little lol) and when we were right in front of the water fountain he got on one knee. I started shaking and tears filled my eyes. I said “YES!” and reached for him – we hugged and kissed and he stood up, smiling, and said “ok let’s put it (the ring) on!” Oh, right! Lol

Riley and Heather were cheering behind us – and Anna jumped out of the bushes with my camera! No one else was around. I hugged them and hugged Ben again – it was literally the best, happiest, sweetest moment ever.

Here are photos from the day in October 2018 when we came here together: 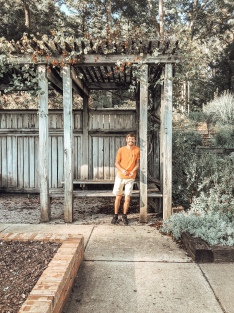 Hi I’m Kayla! I’m a 20 something who has recently graduated and is currently “adulting” (or pretending to know what I’m doing) from the city of Birmingham, AL. When I’m not working you can find me at brunch, on a yoga mat, avoiding small talk or in front of a craft beer. View all posts by Kayla